The Pier-Echoes was a Pierrot troupe founded in Summer 2010 and made up of four emerging artists. Promenade Promotions’ Tony Lidington teamed up with Dr.Jane Milling of the University of Exeter’s drama department for a Arts & Humanities Research Council (AHRC) research project, “Revitalising the Prom”, where a new Pierrot troupe would perform on the proms, piers and park benches of the English Riviera. The Echoes were featured on BBC Radio Devon, BBC Spotlight and filmed an episode for BBC 2′s “The Edwardian Farm”. 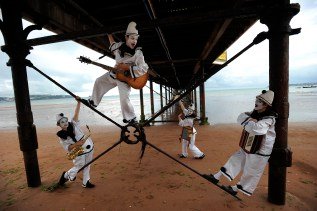 A van pulls up on the seafront at Paignton on a rain-spattered lunchtime. The doors are flung open and a new (actually pretty old) secret weapon in the battle to revive the British seaside spills out.

All afternoon a four-strong pierrot troupe, armed with a guitar, accordion, saxophone and tambourine, cheers up the pensioners huddled in shelters, the families eating egg and chips in the pier cafe, and the bored workers at the crazy golf and trampolines.

The Pier Echoes sing, they dance, they tell old-fashioned jokes. And then an academic with a clipboard asks the hardy Devon holidaymakers what they made of it.

Funded by the Arts and Humanities Research Council, the project is designed to find out if providing good old live entertainment on the beaches and promenades could help regenerate resorts such as Paignton which, frankly, have seen better days.

“There’s very little live acoustic performance that’s free and accessible at the seaside,” said Tony Lidington, better known in the business as Uncle Tacko!, who is overseeing the troupe.

“There are a few Punch and Judy professors around but they are regarded as heritage-based performers. We’re trying to take a historic art form and find out if it could work now and in the future.

“We’re trying to find out how audiences respond. Are they frightened of it? Do they find it stupid? Do they think it’s fey and camp or is it fun and engaging? The project is about finding out how that material can be translated, is it relevant? And if we can make that part of regenerating the seaside.”

The first British pierrot troupes began entertaining the crowds at resorts in the late 19th century; within 15 years there were hundreds of them.

To begin with, many wore the familiar white face makeup, the black and white costumes, pointy hats and pom-poms. Their songs and skits frequently referred to topical events and were sometimes racist and sexist.

By the time of the first world war, the white faces had largely gone, replaced by boaters and blazers – as in Sickert’s melancholy painting Brighton Pierrots, in which a troupe performs to empty deckchairs, a reference to the young men missing because they were fighting, and dying, in northern Europe.

When holidaymakers began flying to Spain rather than heading to Torbay or Blackpool or Skegness, the pierrot troupes, by then also known as concert parties, vanished.

Uncle Tacko! has done his best to revive the form, creating his troupe, the Pierrotters, in the early 1980s. He argues that modern British music and comedy would not have emerged were it not for the pierrot troupes. “You couldn’t have the Kinks, the Beatles, the Coral and you couldn’t have The League of Gentlemen, Fawlty Towers, Benny Hill.” Nor, probably, the Krankies and Bucks Fizz, who are headlining all summer down the road at the Palace theatre (“Yes … they still rip the skirts off,” promises the publicity blurb).

Mischa Eligoloff, from Torbay council’s culture unit, said the issues being tackled through initiatives such as the Pier Echoes’ performances were confronting resorts across the UK.

“There’s been a sharp decline as visitors flew away for holidays. We need to reinvent ourselves to attract the modern market. For us the future is laying down a new layer of culture that will attract more people and help us regenerate the resort.”

The researcher with the clipboard, Jane Milling, senior lecturer in drama at the University of Exeter, said people had been “wildly enthusiastic” about the Pier Echoes.

“A lot of the older residents and visitors are saying: ‘It takes me back to the days when …’ Families love it and young people and teenagers have also found something to play with in it. The other day a group of teenagers came and started dancing with the troupe. The young people were bemused, they didn’t quite know where to place them. Were they clowns? One of them thought they might be the Ku Klux Klan. But they saw it as live contemporary entertainment.”

In the cafe on the pier, Paul Hickling and his wife Chris, holidaymakers from Leicestershire, were a little nonplussed when the troupe marched in and started singing. “I don’t think people knew what to make of it,” he said. “But by the end everyone was enjoying it.”

Outside the amusement arcade on the pier, Mary Hancox forgets that she has a frozen shoulder and dances with the two male pierrot performers, Umberto and Radar. “I’m 90 and not very well,” she says. “They made me feel happy and young again.”